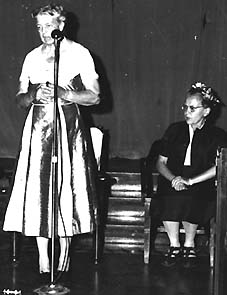 On this day in ...
... 1979, Judge Anna Moscowitz Kross died at a hospital in the Bronx, 88 years after her birth in Neshves, Russia, and 80 after she and her family immigrated to the United States. She won a scholarship to study law at New York University, and after being admitted to the bar she built up a law practice and was active in women's suffrage and other causes. Kross had an illustrious career in law. Serving as the 1st woman New York City Commissioner of Correction, she was "responsible for wiping out many of the dungeon-like features of the prison system," according to her New York Times obituary. (credit for 1958 photo of Kross, at right, listening as Eleanor Roosevelt talks to inmates at Women's House of Detention in New York) Kross had also been the city's 1st woman assistant corporation counsel and among the 1st women to serve as a city magistrate, holding the latter job for 20 years.

This 'Grrl recently heard about Kross and her feminist colleagues in a fascinating presentation by Mae C. Quinn (left), Professor at Washington University School of Law in St. Louis and the author of numerous articles that build on her examination of Kross' papers. (prior post) The most recent is "Feminist Legal Realism," published this year in the Harvard Journal of Law & Gender.